You Are Here: Home / Customer Testimonials

Please Leave A Review About Your
Experience With Viewpoint Tree Service

We had a rather large dead oak tree in a heavily planted and decorated mulched area of our back yard. Randy and his crew removed it for us dealing with power lines close by on one side and a fountain on the other. They were very professional and efficient and had the job finished, including cleanup, in about a half day. Great job! We are very pleased and will definitely call on them again if the need arises.

Viewpoint Tree Service removed a very large tree from my mother’s property estimated to be 168-180 years old. They successfully worked around electrical wires that ran through the tree branches from the street to the house behind us. The tree was taken down on a Saturday, but Randy also came back the following Monday to clean and rake the yard. They did a great job!

Mr. Brooks removed multiple trees from our property in a timely manner and at a very reasonable price! We were especially impressed with how thoroughly his crew cleaned up the job. A very respectful and professional group of men! We will definitely refer this company in the future! And, my stumps were gone early the next day! Awesome Job! Thank you Mr. Brooks!!

Called up Viewpoint at 8:30 am and had 2 trees removed by 2:30 pm the same day. The crew was very friendly and professional. Would recommend to anyone in the area.

Many thanks to Randy Brooks, Viewpoint Tree Service, for removing a Beech tree between our driveway and the neighbors driveway. He and his team cut and lowered the limbs and trunk sections to the pavement, rather than dropping them to the pavement. Based on the work done, we would recommend Viewpoint Tree Service to anyone in need of tree trimming and/or tree removal in the Lynchburg VA area.

I got Randy to cut down some bradford pear trees and get up a hugh pile of brush. Not only was he and his workers very professional, they did a great job and in a very timely manner. I will definitely use them again if I need to and I highly recommend them.

Randy took down two large trees that were close to my house and did a great job. He was in and out in a day. I am very pleased with his service!

I called Randy and he came right out and gave me a great estimate for taking down a tree that was close to my house and dropping limbs. They came out in 2 days and cut down and hauled off the tree. Very professional, and cleaned up everything. I recommend Viewpoint Tree Service to anyone looking for reliable, professional tree removal.

Had a great experience with them. They were professional and had a great time with them taking the trees. Bery great would recommend to anyone.

On a day my husband wouldn’t normally be in town, he realized a very large tree was getting ready to fall, towards our home, vehicles and power line. I texted Randy that it was coming out of the ground. I received a text back immediately that said, “I ‘m coming over right now.” Upon inspection, Randy was extremely concerned for our safety and rearranged his schedule so his team could be here the next morning in 100 degree weather. A storm was brewing, thankfully it went around us, Randy and team arrived early and the tree is now history!!! Yes, he had to maneuver many branches around power lines because AEP wouldn’t cooperate - it’s not an emergency to them until your house is already damaged - yes, cleanup was done to our satisfaction and yes, Randy and team were professional. But what mattered most to us was his concern for our safety and getting the job done as quickly as he did! We are repeat customers many times over and will remain loyal to Viewpoint!

Remove 9 pine tree and clean up property .filling in all hole from trucks in yard
Very reasonable with price and worker ethics. Highly recommended,,this is second time using them.

We had several trees cut down and removed by viewpoint. They were prompt and thorough. They cleaned up all the sawdust and brush completely. Like they were never there. Thank you viewpoint

13 pines where damage and they clean them all up and ground all stump.
Also seed my yard where they drove over for free.
2 days and they where all done. Nice job and very professional

I called Randy and he got back to me within the hour. Quote was reasonable and timeline was right (within a week) easy to work with and professional!

I had Mr. Brooks remove a tree and top another tree. They did a great job and had a very good cleanup. I would recommend them to any homeowner. My trees were close to my house. I felt his experience was good with them so close to my home.

they come out to my house in lynchburg and removed 9 pine trees.
very clean and no damage to the yard.All wood and chip we`re haul away.,
All work was preform to contract,highly recommended

Honest, Professional, Dependable, Diligent, & Reasonable...are words to describe Randy Brooks and his team at Viewpoint. We have used him twice since the April tornado...and are planning on using them again in the near future.

viewpoint tree service was very nice explaining there job performance and giving us a written contract for tree work.the job took 2 days and they were great at cleaning up and very safe and careful not damaging my shrubs.I will be calling them back in future

This company was one of the few who actually answered their phone,came and gave free estimate, and then showed up to do the actual work! Randy Brooks and his team were very professional! They cut down a 90 ft.Oak tree and limbed up 2 smaller ones so my roof wouldnt be compromised in bad weather conditions! Im very happy with their work and highly recommend them! Their rates were very reasonable too! Thanks for the great service!

very professional group guys.remove 5 tree around my local business,clean up all wood and fillrd all holes.
price was reasonable and they had all certificates for insurance. would highly recommand.

removed 1 large oak tree over my house and damage done and clean up well,even put down grass seed at no cost,did have all insurace to do job!!!! great company

Viewpoint took down 3 tree,clean up all wood and grind stumps
Stacked wood in shed and put seed down at no cost! Very good service and safe!!! Price was current with other companys,only differents they have workers comp!! Any wrote me a contract!!! Great job viewpoint 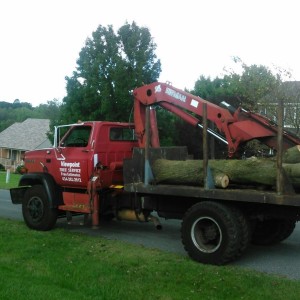 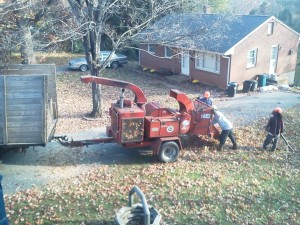